18 Pa.C.S. §§ 101 et seq. is known as Pennsylvania’s Crimes Code.  75 Pa.C.S. §§ 101 et seq. is known as Pennsylvania’s Vehicle Code.  A conviction of certain offenses under the Crimes Code or Vehicle Code can mean fines, suspension of driver’s license, or even incarceration.  This article will detail two criminal statutes, and several statutes under the Vehicle Code pertaining to pedestrians that you may not have known existed.  This article offers no opinions on the constitutionality of the statutes cited.  It is for informational purposes only.

Is it illegal to hold a public meeting and not display the United States flag?  The answer appears to be 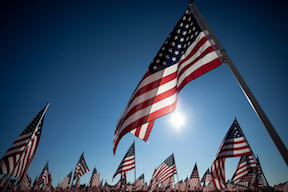 What does the PA Crime Code say about displaying flags at public meetings?

“yes.”  Although the statute “does not apply to gatherings for religious worship,” 18 Pa.C.S. § 2101(b)(1), “[a] person is guilty of a summary offense if, being directly or indirectly in charge of any public gathering, in any place, he fails at such gathering to display publicly and visibly the flag of the United States reasonably clean and in good repair,” id. at § 2101(a).

For purposes of the Crimes Code, “[t]he term ‘public’ is defined as a place to which the public or a substantial group has access, including, inter alia, highways, transport facilities, schools, prisons, apartment houses, places of business or amusement, any neighborhood, or any premises which are open to the public.”  Commonwealth v. O’Brien, 939 A.2d 912, 914 (Pa.Super. 2007) citing 18 Pa.C.S. § 5503(c).  It is important to note that this statute does not require that the flag be on display at all times in a public place, but only when there is a public “gathering” at such place.  Merriam-Webster defines “gathering” as “assembly, meeting.” See full definition here:  http://www.merriam-webster.com/dictionary/gathering.  While this statute has not been interpreted by the courts, criminal cases involving the United States flag have implicated free speech issues.  See e.g. United States v. Eichman, 496 U.S. 310 (1990)(prosecution for burning flag held unconstitutional under the First Amendment).

Have you ever gone door to door leaving advertisements at houses or businesses along a street?  Or have you come home to find a pamphlet for a local business stuffed in or attached to your door?  Or have you found a flyer under the windshield of your car?  Many local municipalities have ordinances that both regulate such solicitation, and require permits to do so.  But this conduct may also be illegal under the Crimes Code, which provides:

This statute would also seemingly illegalize the act of going door to door and leaving advertisements after speaking with the property owner because the law requires “written consent,” and not verbal consent.  Under the Crimes Code, a summary offense is punishable by up to 90 days imprisonment, id. at § 1105,  and up to a $300 fine, id. at § 1101(7).

Although it is titled the “Vehicle Code”, Title 75 contains an entire subchapter devoted to pedestrian rules.  “Who has the right-of-way” is a common question facing drivers and pedestrians.  If there are no traffic-control signals in place, or they are not functioning, then a driver “shall yield the right-of-way to a pedestrian crossing the roadway within any marked crosswalk or within any unmarked cross walk at an intersection.”  75 Pa.C.S. § 3542(a).  Violation is a summary offense carrying a fine of $50.  Id. at § 3542(e).  “Every pedestrian crossing a roadway at any point other than within a cross walk at an intersection or any marked crosswalk shall yield the right-of-way to all vehicles upon the roadway.”  Id. at § 3543(a).

For those who walk or run for exercise, take note of the statute captioned “Pedestrians Walking Along or on Highway.”  If a sidewalk exists, then it is illegal to walk along and upon the adjacent roadway.  Id. at § 3544(a).  If a sidewalk is not available, then the pedestrian “shall walk only on a shoulder as far as practicable from the edge of the roadway.”  Id. at § 3544(b).  If there is neither a sidewalk, nor a shoulder, then the pedestrian must walk “as near as practicable to an outside edge of the roadway and, if on a two-way roadway, shall walk only on the left side of the roadway” – which means against traffic.  Id. at § 3544(c).

It is a violation to stand on a roadway for the purpose of soliciting a ride, soliciting employment, business or contributions from the occupant of any vehicle, or soliciting the watching or guarding of any vehicle while parked or about to be parked.  Id. at § 3545(1)-(3).  “A pedestrian who is under the influence of alcohol or any controlled substance to a degree which renders the pedestrian a hazard shall not walk or be upon a highway except on a sidewalk.”  Id. at § 3550 (emphasis added).  It is interesting that the legislature included this exception to the statute as it appears to condone walking on a sidewalk in an intoxicated state.  But see also 18 Pa.C.S. § 5505 – Public Drunkenness (“A person is guilty of a summary offense if he appears in any public place manifestly under the influence of alcohol or a controlled substance . . . to the degree that he may endanger himself or other persons or property, or annoy persons in his vicinity”).  Except as otherwise provided, “any pedestrian violating any provision of this subchapter is guilty of a summary offense and shall, upon conviction, be sentenced to pay a fine of $5.”  75 Pa.C.S. § 3552.

The attorneys at Sebring & Associates are familiar with consumer protection laws.  If you have a question, please contact us for a consultation.